International Chef's Day is celebrated on October 20th every year. It's a day for chefs and head cooks to be acknowledged for their skill, knowledge and passion, and a day for them to pass inspiration on to future generations of in the food service industry.

This year we're celebrating with some of our favorite appetizers, mains, sides and desserts created by chefs and food professionals who work in collaboration with the Kiwi Importer range. We hope you find some inspiration for your holiday season menus. 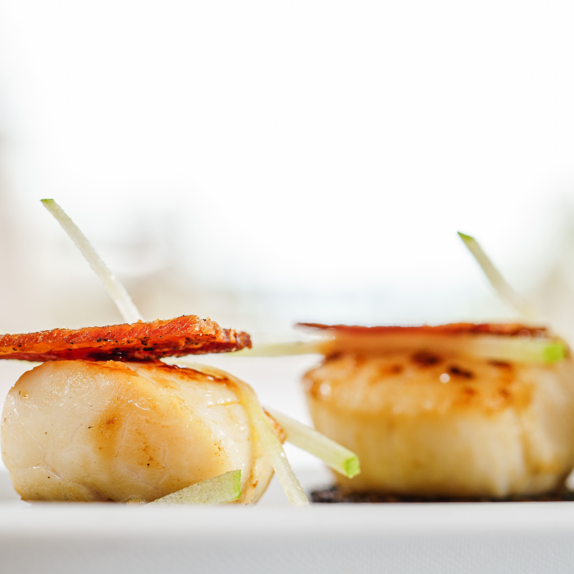 Cook six strips of bacon and chop into 2 inch pieces and set aside.

Heat a tablespoon of butter in a hot frying pan, add 12 large scallops and bring the heat down to medium-high. Sear on each side until caramalized (should take about 2.5 minutes each side).

While the scallops cook, dissolve 2 tablespoons of pomegranate fruit paste in boiling water then drizzle or brush over cooked scallops.

Top each glazed scallop with a piece of bacon and finely sliced strip of green apple.

In a small saucepan over a low heat mix a teaspoon of honey, 1/2 teaspoon of mustard, 2 tablespoons red wine vinegar, 1/3 cup olive oil and chopped herbs (we used a sprig of fresh thyme leaves and 2 tablespoons of basil). Stir to combine, remove from heat.

Lightly oil 8 small vine ripe tomatoes, and cut and de-stone 2 small peaches. Grill both the tomatoes and peaches until soft and set aside.

Toast your favorite sourdough bread. Top with the tomatoes, peaches, 100 grams of crumbled feta and the honeyed herb mixture. Season with salt and pepper.

Pre heat oven to 400F. Mix 3 tablespoons of Tamarind Chutney (any heat) with a tablespoon each of honey, soy sauce and ketchup in a bowl. Add about 2.5 pounds of chicken pieces (thighs work great) and cover with the marinade.

Line baking tray with oil or paper and in a single layer place chopped and peeled hard vegetables. We suggest potatoes, sweet potato, carrots, parsnips and red onion. Drizzle with olive oil, season with salt and pepper and bake.

After 15 minutes, remove the baking tray, give the veggies a stir and place the chicken skin side down up, on top of the partially baked veggies. Don't throw away the marinade!! Put the tray back in the oven for another 20 minutes.

Remove the tray again, brush or spoon more marinade over the chicken and bake for about another 20 minutes - just until the veggies are soft, the chicken is cooked through and the tamarind glaze is just starting to get sticky!

Melt 2 tablespoons honey in a small saucepan. Add 2/3 cup raw almonds, mix and spread on a lined baking tray. Season generously with salt and bake for 5-10 minutes and set aside.

Place a couple of peeled and chopped, red beetroot, golden beetroot, 8 small carrots, a large red onion and a couple of garlic cloves in a baking tray. Sprinkle over 1/2 teaspoon each of dried chili flakes, cumin, cinnamon and sumac. Drizzle over olive oil, a couple of teaspoons honey and salt and pepper. Make sure the vegetables are coated well. Bake in a 400F oven for about 25-30 minutes, stirring half way, until cooked.

To serve spread a good few spoonfuls of labneh, top with the cooked vegetables, sprinkle a little more sumac and olive oil, a squeeze of lemon juice and the roasted honey almonds. Garnish with flat parsley or cilantro and serve with warm flat bread.

Wash and pierce a whole sweet potato, place on baking tray and bake until soft (about 45 minutes at 350F).

Place a tablepoon of coconut sugar, 1/2 teaspoon water and a pinch of salt in a saucepan and cook for a couple of minutes at medium heat until the sugar is dissolved. Add 1/4 cup roasted almonds and coat them with the sugar mixture. Mix for about a minute and turn out onto parchment paper to cool.

Add a tablespoon coconut oil to a hot fry pan, sprinkle a little cinnamon on a large banana and place in pan. Cook for about 2 minutes each side on high heat to caramelize. Remove and set aside.

Slice sweet potato lengthways cutting almost, but not quite to the bottom. Pull slightly apart to make room for toppings. Layer with coconut yogurt, almond butter, caramalized bananas, candied almonds and a touch of dark chocolate.

Blend together 2 cups of muesli (Walnut, Plum and Hemp is a great choice), 1 cup almond flour, 3 tablespoons maple syrup and 2 tablespoons coconut oil until it can hold its shape and press firmly into a tart tin and set aside.

Pour into the tart case and pop in the freezer to set for  at least two hours.

Remove from freezer at least 10 minutes before serving. Top with fresh plum slices and a sprinkle of muesli.

Beat 1 cup egg whites, 1 teaspoon vanilla extract, 1/2 teaspoon cream of tartar and 1/4 teaspoon salt at a medium-high speed until foamy (about a minute). Increase speed and slowly and steadily add about 1.5 cups of sugar. Beat until glossy peaks form (about 2 - 4 minutes). Add 1 tablespoon cornstarch and burst another 10 seconds until combined.

Spoon meringue onto parchment using the back of a spoon to form a pie sized disk with a small well in the middle.

Bake until set and dryi n a pre-heated 225F oven. It will take 90 minutes to 2 hours and will feel dry to touch (not sticky). Turn oven off and let it sit in a closed oven for another 1.5 hours. Remove and let completely cool.

Place 3 cups of mixed berries in a bowl with 1/4 cup of sugar. Beat 1 cup of mascarpone, 1/3 cup heavy whipping cream, 2 teaspoons vanilla paste and 1/4 cup sugar on medium-high until soft peaks form (be careful not to over beat). Decorate pavlova with the cream and berries and serve immediately

Mix 2 cups almond flour, 2 tablespoons each of almond butter, maple syrup and coconut oil. A teaspoon cinnamon and a pinch of salt until dough forms and press into a tart tin (or several smaller ones). Bake for 10 minutes in a preheated 360 F oven. The crust will expand when baking so try to make it thin in the tin for best results.

While the cases are baking, mix 3 tablespoons each of maple syrup and Chai Spiced Almond Butter, 1 tablespoon lemon juice and 1 teaspoon of each vanilla paste and cinnamon and a pinch of salt.

Remove the tart case from the oven and spoon in the filling mix. Top with thinly sliced green apple and glaze with a touch more maple syrup. Return tart to the oven and cook another 20 minutes, until the apples are golden brown. 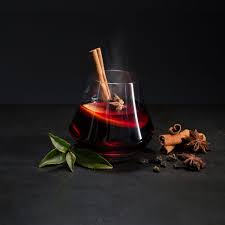 Heat 500 ml water with dark oolong tea, 10 gram ginger, and 5 gram each of cinnamon, clove and star anise. Bring to the boil then lower the heat and simmer for 15 minutes.

Add 500 ml red wine (you could use blackcurrant juice for a non-alcoholic version) a vanilla pod and orange slices. Simmer for another 10-15 minutes.

Strain and sweeten with honey if desired. Enjoy while warm.

* New customers only. You'll receive an email when your account has been credited